After a long, long flight via Melbourne, involving an overnight camp-out on a bean bag in the Melbourne airport, we finally made it New Zealand!! Surprisingly, immigration was a breeze! No questions about where we’d been before, no checks, no hassles. We walked into the arrival hall and there stood Robert Marchl, waiting to collect us. It couldn’t have been easier. FYI: Robert is the son of Alfred Marchl, an old colleague of my Dad’s from our days is South Africa. And, when in Munich, Mom and Dad always stay in Alfred’s flat. Via Alfred, Robert got the message that Luca and I were going to be in Auckland and he immediately offered to pick us up and have us stay with him. It couldn’t have been more convenient: we got whisked away from the airport and half an hour later were having a home-cooked meal at the family dinner table with Rob, his wife and their two kids. They went wild with endless travel tips and advice about New Zealand and loaned us their Lonely Planet guide and a road atlas. Yesterday, Bettina drove me back to the airport to pick up our rental car while Luca and their son Oli stayed at home and had a Nerf gun war and played Nintendo games. This morning they insisted on feeding us a good breakfast and so it was 11am by the time we managed to get in the rental Punto and hit the road.

Day #01 of our Kiwi Road Trip was a wet one. A very wet one, to put it mildly… We left in the pouring rain and drove for almost 6 straight hours in the pouring rain. Low hanging dark clouds made it difficult to see much and so I decided that instead of breaking up the drive down to Wellington into two parts to just haul ass instead and get to Wellington as quickly as possible. It took us exactly 8 hrs of driving to cover the 670km and considering the road we took, which is one of the country’s main „highways“, that was a very fast time. Most of the road is a single-lane road, and pretty rough at times. Definitely not pot-hole littered like the horror roads in South Africa but still the kind of driving where you have to pay really good attention all the time! It gets dark just after 5pm already, so the last part of the drive we didn’t see anything at all. Unfortunately in a way, but at least we’ve wasted no time getting to Wellington and we get to hang out with Mel and Shannon for all of Sunday. We’re going to keep going south, down to Queenstown as quickly as possible and then work our way back up. That way, we’ll come back to Wellington to stay with el and Shan a bit longer. It was really cool to see them again and it felt like it had only been a few weeks since the last time, not more than a year or two already! Luca is really happy to be here and to see them as well. Getting to Mel and Shan has been one of our landmark things to look forward to while on the road and any time when things were rough, we said to each other: as soon as we get to Mel and Shan, we’ll be with friends again and we can relax a bit 🙂

Definitely happy that we’ve made it here…! 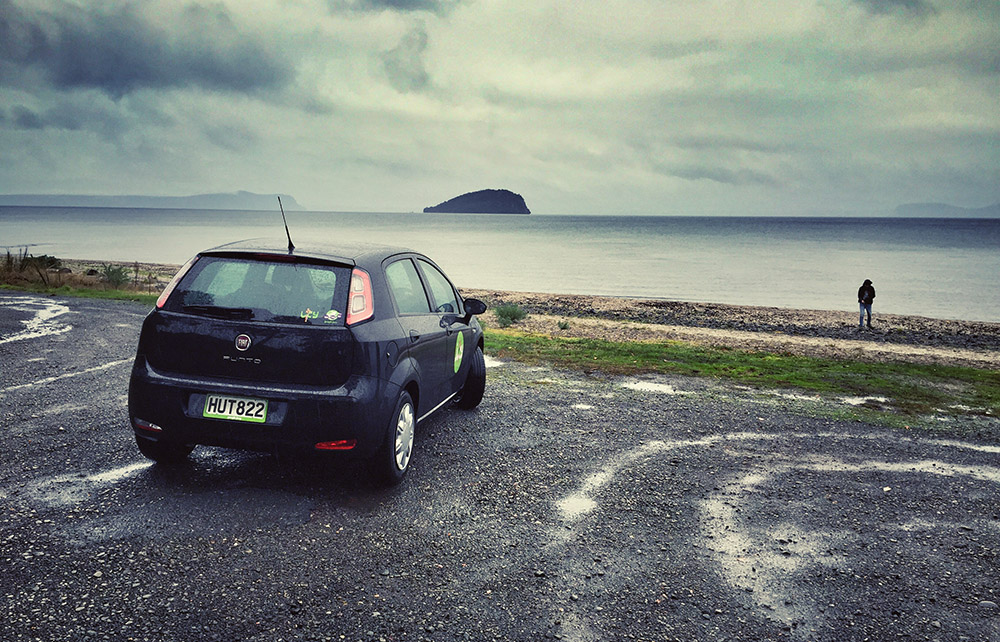